We all start our day in our own preferred way and today proved no different. Some needed a sleep-in to start getting over their jetlag; others got up to photograph sunrise over the Sea of Galilee; others went for a walk to find new birds. The spectacular breakfast spread at the Sofia Hotel made getting up worthwhile whatever activities you’d undertaken beforehand. cheeses, salads, breads, shakshuka, fruits – whatever you imagined was on offer and made a fabulous start to day 2 of our JNF tour of Israel.

Our cultural immersion in the homeland continued today, with our 8am arrival at Hatzer Kinneret, in the north east of Israel. We heard of the wave of immigrants from Europe making Aliyah and purchasing land from the Ottomans. Many mitzvot related to farming, so the immigrants and their families were keen to establish agricultural practices; a further incentive was that the law stated that if the new land owners failed to farm the land before three years were up, they must hand it back.

We watched a fascinating video about the Kinneret girls’ training farm, where they learnt to milk cows and grow crops; we also learnt about the difference between a kibbutz and a moshav. It was hard to imagine what life would have been like then, working the land in such harsh conditions and handing over your children for others to parent while you were out farming all day. It was also impressive to consider just how hard-working and resourceful these people must have been to develop and cultivate thriving farmland in such a dry and desolate environment.

Driving in the area revealed a huge range of fruits growing beautifully in the sunshine, including lemons, avocadoes, mangoes, bananas and grapefruit, as well as some impressive fish farms. We admired the Golan Heights and the stunning valley and mountains surrounding it.

At Naharayim at Gesher, we learnt about the technology involved in generating hydroelectric power (HEP) and stood next to the wire fence which forms the Israel boundary with Jordan. The HEP plant supplied 90% of electricity to all Israel until 1948 – the day the state was born, the power plant died, but Israel has enjoyed continuous electricity ever since.

We enjoyed an interesting history lesson of Israelis defending against the Jordanian and Iranian armies and the temporary existence of Trans-Jordan. Israelis seem to be particularly good at designing interactive exhibitions – the re-enactment of the storm which ruined the building of the hydroelectric power plant and put its construction back at least a year was fabulous.

Next on the itinerary was a visit to one of the 270 kibbutzim in the country – Sde Eliyahu. A speaker explained how members have to be elected into the community and we were able to witness the way they lived as well as hearing about how the Kibbutz works from a financial perspective, as members receive a budget based on need, rather than a salary or wage. The kibbutz provides 15 years of school education to all the children, followed by three years’ tertiary education. It was interesting to find out that the members of the kibbutz live in outside society and are influenced by it – iPhones were in evidence and the community owns 50 communal cars; they are currently investigating the purchase of Teslas! A fantastic variety of fruits and vegetables are grown by the community – carrots, onions, garlic, sweetcorn, dates, watermelons, grapes … We heard about the organic farming methods using compost from animal and food waste rather than chemical fertilisers and learnt of biological methods such as using bumble bees to increase pollination rates in the hothouses. Another income stream includes dehydrating spices for export. A brilliant lunch showcased the fresh produce and was enjoyed by all.

Our next stop was to a wind farm. Experimental wind turbines in 1986 had led to the current installation of 14 turbines, each 44 metres high and with blades 29m long and foundations 18m deep. Standing on the top of the hill playing with anemometers in the strong wind really brought home its power. It was an amazing opportunity for educators to learn more about such a relevant use of technology and reflected Israel’s progressive thinking, using renewable energy generation techniques. If you hadn’t previously considered all the uses of wind, the brief video we watched would probably have contributed to your list – it included winnowing, sailing, moving clouds, helping birds and butterflies migrate, spreading seeds, scattering leaves, flying kites and flags, windsurfing and ballooning. It concluded with the thought that “The rain is the wind’s tears” and stated that technology and nature, spirit and wind are working together for a better future.

The final stop of the day was to the KKL-JNF House of Excellence (Nof HaGalil). Connecting with the students was described as “inspirational” by some teachers, who were impressed by the way these students were able to speak so confidently in a second language to unknown adults. The House of Excellence involves offering extra assistance to Year 9-12 students outside school time, to help them achieve. In later years, the students who have gained from the opportunity then share their own knowledge by returning to be the teachers for the next round of students. It was fantastic to see how enriching the program has been for some of those students and wonderful to hear about how inclusive the program is, accepting students of any faith or background who want to learn leadership and life skills to better themselves.

Shlomo Benhaiem’s talk on the history of KKL-JNF ended our visit to Nazareth. It was a fascinating trip through time, and provided a lot of useful information particularly beneficial to those educators less familiar with the details of the birth of Israel. It also made sense of the JNF blue box that some of us have in our offices back in Australia! An amazing story to hear of Herzl’s 50 year vision coming to fruition.
After a dinner that was as impressive as the breakfast with which we’d started the day, it was time for another guest speaker. Arguably the last thing you’d want to do at a quarter to nine at night after a long day would be to sit and listen again, but Neil Lazarus (awesomeseminars.com) was well worth staying awake for. Funny, clever and thought-provoking, he provided strategies to enhance discussions back in the classroom and it was hard to imagine a better end to a fabulous day. 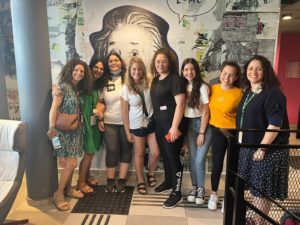 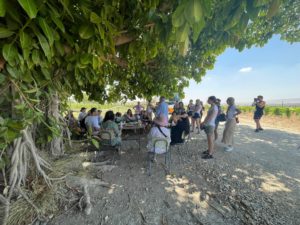 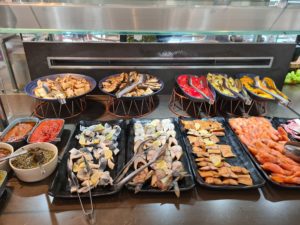 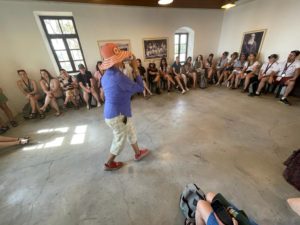 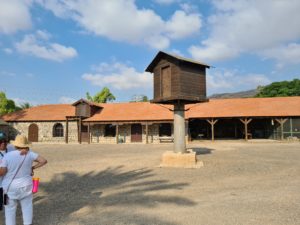 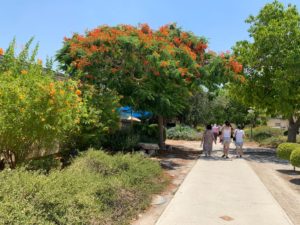 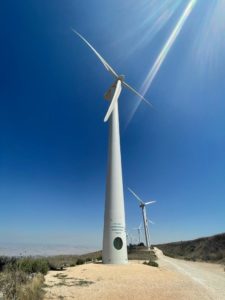 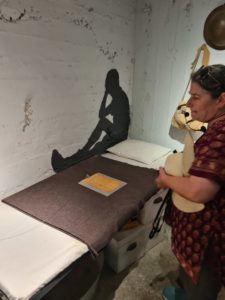 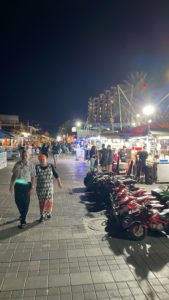